There are two ways to measure your health and fitness levels and progress: Body Mass Index (BMI) and Body Fat percentage. These two instruments are often considered interchangeable, however Body Mass Index and Body Fat Percentage are best used in different aspects of your fitness voyage.

What is Body Mass Index (BMI)?


Body Mass Index is a measure of body fat based on your height and weight. Physicians widely consider BMI measurements as a simple way to determine if a person is healthy or unhealthy, underweight or overweight. It is important to note, however, that your BMI score is not a dictation of what you should weigh…it is more a general guideline (more on this below).

Here is how to calculate your BMI score:

The US Department of Health and Human Services has this handy calulator on their website that can also do this for you.

After you determine your BMI, you can see where you fall:

What about Body Fat Percentage?
Body Mass Index uses your weight in the formula but unfortunately it does not take into account if that weight comes from fat rather than lean muscle tissue. Athletes who carry an abundance of lean muscle tissue may seem rather heavy for their frame or size but that is simply because muscle weighs more than fat. These particular individuals may have a rather high BMI but not have a great deal of fat. This is where Body Fat percentage takes over. Body fat percentage is the percentage of your body that consists of fat.

For females: a body fat percentage of:

For males: a body fat percentage of:

Measuring Body Fat
There are a variety of ways to measure your body fat percentage. You can use tools such as skin calipers, underwater or hydrostatic weighing, a Tanita machine which is a bioelectrical impedance, or a Bod Pod.

The Bod Pod is considered the best and most accurate tool for fitness enthusiasts or individuals on a mission to decrease fat and track progress. The Bod Pod measures body mass using a precise scale, and volume by sitting inside the Bod Pod.

Where can I find a Bod Pod? 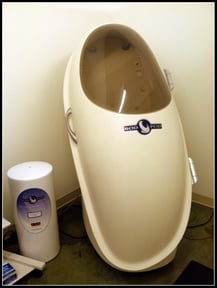 The Bod Pod is stationed at The Arena Club every 3 months and is a fantastic tool for Personal Training clients or any fitness enthusiast looking to track results (open to both members and non-members).  Learn exactly what you are made of and how much fuel (calories) it takes to maintain your current muscle or to lose fat.  Click here for upcoming BodPod dates!